During the winter season, your Public Works Department gets started as soon as forecasts begin reporting potential snow events in the local area. If temperature and precipitation allows, we start by pre-treating the primary anti-ice routes with a brine solution or a brine/carbohydrate solution for lower temperatures to reduce the potential for icing and slippery conditions during the initial snowfall. Once the snow falls, Public Works crews hit the streets working to keep emergency snow routes open.

After the snowfall ends and the primary and secondary routes are cleared, Public Works crews begin city-wide plowing operations in 10 designated snow removal zones. Our goal is to plow all the streets within 24 hours after the snowfall ends. Additional snow, ice, and high winds can impact our ability to meet this goal; therefore, the timeline may be extended if another snow event follows closely behind. Public Works does not have the capability to run full 24/7 operations; however, we do stagger our manpower when necessary to provide around-the-clock coverage to apply sand/salt on primary and secondary intersections and to plow areas susceptible to drifting snow during high wind events. We maintain over 500 lane miles of streets, 24 alleys and 240 cul-de-sacs and bulbs. In addition to plowing, we clear snow in the downtown areas and haul it away to a snow storage location.

What is our Snow Removal Process and Schedule?

Salting and/or sanding occurs both during and immediately following a snow or ice event on the primary and secondary snow routes. The proportion of salt and sand will depend on temperature. Snow and ice removal crews will salt and/or sand the residential streets after the initial snow is cleared. Residential streets treated with salt and/or sand will primarily be in higher traffic areas and residential streets feeding into primary or secondary snow removal routes. Requests for salt/sand can be made by contacting Public Works at 218.299.5422. If it is an emergency after normal operating hours( 7am-4:30pm, Monday-Friday), call Red River dispatch at 701.451.7660 and they will contact a salt/sand truck if they are running or dispatch will contact a Public Works on-call employee to respond.

How can residents help during snow and ice removal operations?

Snow plowing operations are challenging and require intense concentration. Your Public Works crews take great pride in the job they do and they work long hours keeping our streets safe. But, we need your help to operate safely and efficiently.

If you have questions regarding snow removal, please contact Public Works at 218.299.5422 or at Public Works.

Your Public Works crews are ready for the snow season! Thank you for your patience and understanding during snow removal operations. 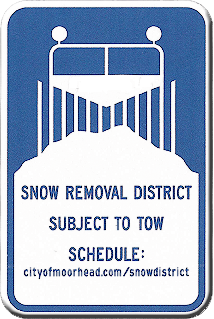 In order to clear the roads effectively, vehicles in violation of these parking rules will be towed at the owner’s expense.

Please see the Snow Removal District page for more information and to sign up for notifications when these parking restrictions are activated.

Snow emergencies are declared because of falling snow, sleet, freezing rain, or when a forecast by the National Weather Service indicates that weather conditions could create hazardous travel conditions. Snow emergencies are declared to free up hazardous roadways for movement of fire, health, police and emergency traffic, as well as to ensure the safety of the community.

During a snow emergency, vehicles must be moved for plowing. If your vehicle is parked in violation of the snow emergency rules, it may be towed.